A write up about the QPLHIV meet that happened recently in the eve of Bangalore Pride month from a participant: 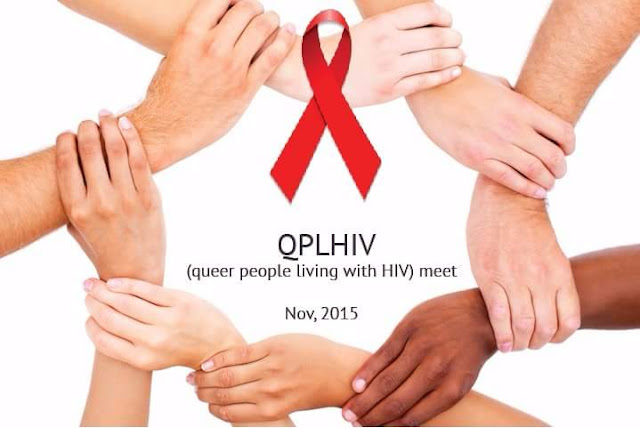 This is a follow up meet of a group that has been formed after the first meeting during November 2014. A few of us, hiv positive individuals who have been in touch with each other through watsapp group since last November's first meeting, decided to meet during this pride too. We have been advertising about this meet through Bangalore Pride and Goodasyou groups since a month, along with a  registration form so that any new positive individuals can join us. We have created a new email id blrqueerpozhelp@gmail.com so that people can reach us/email with queries even if they do not wish to meet us directly.

After much deliberation, we decided to meet at a central location of Bangalore. A few people have come from Mysore, Chennai and other near by towns to make it to the meeting. There has been a total of 12 people, all queer men. Barring a few of us who met each other before, most of us were meeting each other for the first time. Some of us were very anxious in meeting new people directly. Although there were many more registrations and more people agreed to come, finally only 12 of us had crossed that barrier and could make it to here.

The class diversity was very evident. Some of us are from moderately educated, upper class background and some weren't. Some of us were out about our sexuality and could call ourselves Gay/Bi or with other labels, some weren't open about such identifications. A few were not even interested in any serious discussions and mainly wanted to see/date others. But as the discussion and conversations progressed, people started becoming comfortable and opened up.

Mainly we have exchanged our knowledge about HIV, ART and health tips. It was a bit shocking to see that many people did not know they must use protection even if two hiv positive people are having sex with each other, for the simple reason, that each person may have a different type of HIV or virul load or presence of other STDs or the body resistance. We have learnt that while some of us are taking free ART medicine from Govt ART centers like St.Johns Hosptial, Koramanagala and Victoria Hospital, some of us preferred to pay for it and take from private hospitals such as Fortis Hospital. A few are yet to start ART since they are still deliberating whether to start ART, given their CD4 count is quite good and they are advised by some doctors to wait and watch.

Apart from the exchange of health tips, what's more valuable is the happiness in some faces in getting to know other people, the sense of belonging in a support group, the sense of gaining new confidence. Along with group discussions, we did spend some time in conversations with individuals and in smaller groups, depending on our interest level of each of us.

After 1.5-2 hours, we had finished the meeting, with a group meditation session, proposed by one of the participant. The outstation people had to catch trains back, so we had to wind up fast, after having lunch.

Hope this support group survives and will become more helpful to many more through future get-togethers and other events.

To contact us, write to  blrqueerpozhelp@gmail.com.
Posted by Goodasyou at 6:13 AM